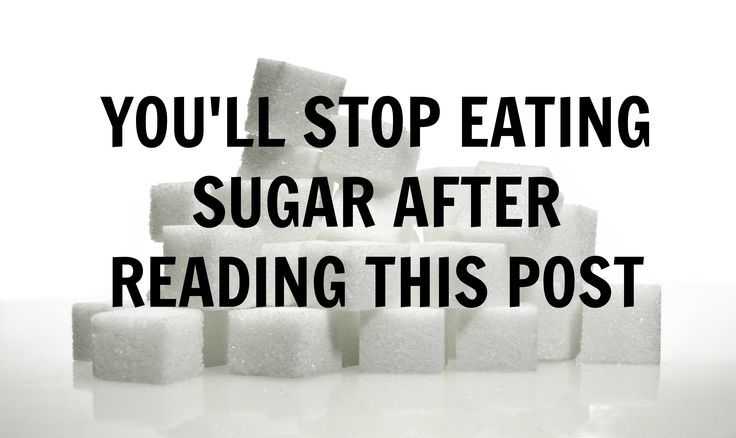 Even one pack of M&M’s may be more than you should eat in a day, newly drafted guidelines from the World Health Organization suggest.

The WHO used to recommend that you get no more than 10% of your daily calories from sugar, but now they’re considering lowering that to 5%. For an average, healthy adult, that would mean 25 grams, or about six teaspoons of sugar per day. (That’s a little less than what you’d get from 10 Hershey’s Kisses. A single can of Coke has 39 grams of sugar.)

A teaspoon of sugar in your coffee or a half cup of ice cream won’t kill you – all things in moderation – but the average sugar intake in the U.S. is 22 teaspoons per person per day. That’s almost four times as much as the WHO’s new guidelines suggest is healthy. People have been sounding warnings about the dangers of too much sugar for a long time. As early as 1957, John Yudkin, a professor of nutrition at Queen Elizabeth College in London, began arguing that when it came to heart disease and other chronic ailments, sugar – not fat – was the culprit.

So what happens if you eat too much sugar? Here’s a depressing rundown.

Trust your dentist on this one: Sugar is such an enemy to dental health that one study way back in 1967 called it the “arch criminal” behind cavities. The connection between sugar and cavities is perhaps the best established. “Tooth decay occurs when the bacteria that line the teeth feed on simple sugars, creating acid that destroys enamel,” Anahad O’Connorexplains at The New York Times. Because acid is a key culprit, sour candies are especially nefarious.

Leptin is a hormone that lets your body know when you’ve had enough to eat. In people who develop leptin resistance, this “I’m full” signal is never received, presenting a major obstacle for weight control.

Some studies have raised the possibility that leptin resistance may be a side effect of obesity, not a contributing cause. But research in rats suggests that overconsumption of fructose can directly lead to higher-than-normal levels of leptin, which can reduce your body’s sensitivity to the hormone. Removing fructose from the rats’ diets generally reversed those effects.

“Our data indicate that chronic fructose consumption induces leptin resistance prior to body weight … increases, and this fructose-induced leptin resistance accelerates high-fat induced obesity,” concluded one 2008 study in rats. Still, more research is needed to test whether these effects hold true in humans as well.

Other than adopting a completely sedentary lifestyle, there are few routes to packing on the pounds that work as swiftly and assuredly as making large amounts of added sugars a staple of your daily diet. Sugary foods are full of calories but will do little to satiate your hunger. A 2013 review of 68 different studies found “consistent evidence that increasing or decreasing intake of dietary sugars from current levels of intake is associated with corresponding changes in body weight in adults.” Want to lose weight? Cutting your sugar intake is a good place to start.

When you eat a lot of high-sugar meals – donuts for breakfast, anyone? – it can increase your body’s demand for insulin, a hormone that helps your body convert food into usable energy. When insulin levels are consistently high, your body’s sensitivity to the hormone is reduced, and glucose builds up in the blood. Symptoms of insulin resistance can include fatigue, hunger, brain fog, and high blood pressure. It’s also associated with extra weight around the middle. Still, most people don’t realize they are insulin resistant until it develops into full-blown diabetes – a much more serious diagnosis.

One study that followed 51,603 women between 1991 and 1999 found an increased risk of diabetes among those who consumed more sugar-sweetened beverages – that’s soda, sweetened ice tea, energy drinks, etc. And a massive review of previous research involving 310,819 participants supported this result, concluding that drinking lots of soda was associated not just with weight gain but with the development of type 2 diabetes.

Portion control may be especially crucial when it comes to sugar. “Duration and degree of sugar exposure correlated significantly with diabetes prevalence … while declines in sugar exposure correlated with significant subsequent declines in diabetes rates” – even after controlling for other socioeconomic and dietary factors, concluded a 2013 study of eating habits and diabetes prevalence in 175 countries.

Obesity is one of the most-cited risks of excess sugar consumption. Just one can of soda each day could lead to 15 pounds of weight gain in a single year, and each can of soda increases the odds of becoming obese, a JAMA study noted.

Sugar may well raise the risk of obesity directly, but the association could be mediated by diabetes, metabolic syndrome, or other diet and exercise habits associated with high-sugar diets. And it’s possible that soda is uniquely pernicious, above and beyond other sugary foods.

“The complexity of our food supply and of dietary intake behavior, and how diet relates to other behaviors, makes the acquisition of clear and consistent scientific data on the topic of specific dietary factors and obesity risk especially elusive,” concluded one 2006 review. Still, a more recent review cautioned, “we should avoid the trap of waiting for absolute proof before allowing public health action to be taken.”

Because of the unique way we metabolize fructose, it creates a stress response in the liver that can exacerbate inflammation. High doses of sugar can make the liver go into overdrive. That’s one reason excess fructose is a “key player” in the development of nonalcoholic fatty liver disease, where fat accumulates in the liver in the absence of alcohol abuse.

People with this diagnosis have been found to have almost double the soda intake of the average person. Most don’t experience any complications and don’t realize they have it. But in some people, the accumulated fat can lead to scarring in the liver and eventually progress to liver failure.

A handful of studies have found that high-sugar diets are associated with a slightly elevated risk of pancreatic cancer, one of the deadliest cancers. The link may be because high-sugar diets are associated with obesity and diabetes, both of which increase the likelihood someone will develop pancreatic cancer. Still, one large study published in the International Journal of Cancer disputed the link between increased sugar intake and increased cancer risk, so more research is needed.

The idea that a high-sugar diet – and too much soda in particular – may be a risk factor for kidney disease is still just a hypothesis, but there’s some reason for concern. “Findings suggest that sugary soda consumption may be associated with kidney damage,” concluded one study of 9,358 adults. (The association emerged only in those drinking two or more sodas a day.) Rats fed extremely high-sugar diets – consuming about 12 times the percentage of sugar recommended in the WHO’s new guidelines – developed enlarged kidneys and a host of problems with regular kidney function.

In another very small study following only 15 people, researchers found that drinking 60 grams of fructose elicited a spike in blood pressure two hours later. This response may be related to the fact that digesting fructose produces uric acid, but – as one meta-analysis of the data concluded – “longer and larger trials are needed.”

Heart disease may not get as much time in the spotlight as diseases like cancer and AIDS, but it is in fact the number one cause of death in the United States. While smoking and a sedentary lifestyle have long been acknowledged as major risk factors. Conditions associated with excess sugar consumption, like diabetes and being overweight, are also alreadyknown risk factors for heart disease, and recent research suggests that eating too much sugar might stack the odds against your heart health – especially if you are a woman.

In one study of rats with high blood pressure – which may offer clues for further research but can’t be directly extrapolated to humans – heart failure came fastest when they were fed a diet high in sugar (when compared to high-starch and high-fat diets). And a CDC study of 11,733 adults concluded that there is “a significant relationship between added sugar consumption and increased risk for CVD [cardiovascular disease] mortality.” When participants got 17% to 21% of their daily calories from sugar, they were 38% more likely to die from heart disease than those who limited their calories from sugar to 8% of their total intake.

Doctors don’t all agree the “food addiction” you read about in diet books is a real thing, but there’s recently been some research indicating that the disorder might be possible in humans. And there is evidence that rats can become dependent on sugar, further supporting the idea that similar behavior might be present in humans.

“In some circumstances, intermittent access to sugar can lead to behavior and neurochemical changes that resemble the effects of a substance of abuse,” noted one study that found sugar-addled rats displayed bingeing, craving, and withdrawal behaviors.

Obesity and diabetes are both risk factors for cognitive decline and Alzheimer’s, so it’s no surprise that studies are beginning to find a link between excess sugar and these cognitive conditions. The reasons for a possible relationship between a high-sugar diet and dementia later in life are still unclear.

Is there a direct dietary association? Is the real link between diabetes and Alzheimer’s only? One recent study found rats that had diets high in fat and sugar could dull emotional arousal and contribute to memory impairment. And another study in humans found an association between diets high in high fructose corn syrup and reduced performance in the hippocampus. Researchers are currently investigating the many open questions, with some urging caution until more evidence is gathered.

If you’re scarfing down lots of excess sugar, you’re probably skipping over the things you should be eating instead. “High-sugar foods displace whole foods (eg, soft drinks displace milk and juice consumption in children) and contribute to nutritional deficiencies,” noted a statement from the American Heart Association. In a study of 568 10-year-olds, as sugar intake increased, intake of essential nutrients decreased. And in a 1999 study, researchers from the Department of Agriculture found that when people got 18% or more of their calories from sugar, they had the lowest levels of essentials like folate, calcium, iron, Vitamin A, and Vitamin C.

Gout used to be considered a disease limited to the rich, but as our diets have changed, this painful form of arthritis has become more common across all sectors of society. Certain foods like organ meats and anchovies that are associated with gout have high levels of something called purines, and when your body breaks them down, it produces uric acid. A buildup of uric acid is what often leads to gout.

But uric acid is also a byproduct of fructose metabolization, and now newer research is suggesting that too much sugar could be a risk factor for gout as well. “Consumption of sugar sweetened soft drinks and fructose is strongly associated with an increased risk of gout in men,” concluded a 2008 study that tracked thousands of patients for more than a decade.