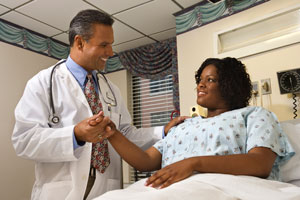 In 2014, Christiana Donkor, a young woman from Nigeria, struggled to walk a few blocks from her home to a bus stand on her way to the airport. Suitcase in hand, she moved at a snail’s pace as she experienced severe exhaustion due to a flare-up of her sickle cell disease. One step at a time, she finally made it, propelled by the hope of a new treatment that awaited her at the other end of her journey to India.

Than Christiana got to know about the treatment for Sickle Cell Anemia which is known as Bone Marrow Transplant through Medsurge India on Facebook through one of their campaign for Sickle Cell Awareness and was happy to know the success stories of BMT procedures. With the help of Medsurge India team guiding at each step to plan her medical procedure she arrived in India, to undergo the procedure designed to reverse her sickle cell anemia. The genetic disorder causes crescent-shaped red blood cells to form, reducing blood and oxygen flow. The condition can cause fatigue, severe pain, organ damage, stroke, and even death. Worldwide millions of people have the condition, mostly in those of African ancestry.

After a week of preparation, specialized doctors removed Christiana bone marrow and replaced it with specially-treated bone marrow obtained from her brother, a healthy, compatible donor who does not have sickle cell disease. Prior to the transplant, her brother underwent a treatment that made his marrow rich in stem cells.

One of the Consultant at BMT Centre said “Stem cells are a type of unspecialized cell that can change into a more specialized cell,such as a healthy red blood cell, under certain conditions. We transfer healthy bone marrow stem cells to an adult sickle cell patient, then the patient starts producing normal red blood cells and the patient no longer have sickle cell disease,”  He notes that doctors have previously used stem cell transplants to treat sickle cell disease in children with severe complications, such as stroke, with great success.  But recent advances have allowed doctors to extend this procedure to adult patients while lowering the risk of complications, he added.

Like most of the 30 adult patients who have undergone the transplant, the result was a success. Christiana’s new bone marrow was soon producing normal red blood cells, not unhealthy sickle-cells, on a continuous basis. As a result, her symptoms—the fatigue, the pain—disappeared.

“I never like to say ‘cured,’ but it feels like a cure,” she said. “It’s amazing. I feel great.  As far as I’m concerned, my sickle cell disease is gone.”

Christiana, age 32, now works as a lawyer and a volunteer for a religious organization in Nigeria. She said that she has not had a pain crisis since the transplant. She’s no longer taking powerful pain medications. She no longer receives blood transfusions that have become common treatment for many sickle cell patients.

Today, Christiana now does things she only dreamed of doing previously. One of those activities is running. After her transplant, Christiana started jogging a little bit at a time.  By July of 2015, she accomplished what she calls one of the “greatest victories of my life”:  she ran nonstop for 2 hours. This was a virtual marathon compared to the walk to the bus stand that left her breathless.

Patients like Christiana offer a glimpse at what sort of transformations might take place in the future: from being barely able to walk a few steps to running a virtual marathon.