What is Multiple Myeloma?

Multiple myeloma is a cancer arising from abnormal growth of plasma cells. Plasma Cells are a normal component of the bone marrow which is produced from B lymphocytes. They are responsible for producing IMMUNOGLOBULINS, which are proteins produced to fight infections. In multiple myeloma, collections of abnormal plasma cells accumulate in the bone marrow, where they interfere with the production of normal blood cells 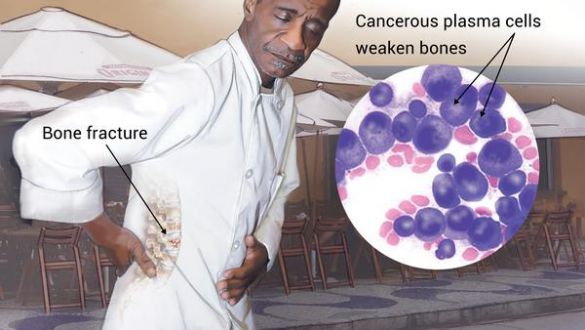 Multiple Myeloma (MM) is classified based on the type of Immunoglobulin heavy /light chain it produces. This can be

The light chain is either Kappa or Lamda. 25% of cases produce light chains only. These are called PARAPROTEIN and they compromise the production of normal immunoglobulins.

What are the Symptoms of Multiple Myeloma?

The symptoms of myeloma are abbreviated as CRAB:

Other signs and symptoms of multiple myeloma may include:

What are the causes and risk factors of Multiple Myeloma?

Although the exact cause isn't known, doctors do know that multiple myeloma begins with one abnormal plasma cell in the bone marrow - the soft, blood-producing tissue that fills in the center of most of bones. This abnormal cell then starts multiplying.

Some factors that may increase the risk of multiple myeloma include:

How do we Diagnose Myeloma?

Several chromosomal abnormalities such as 17pdel or 13q deletc are associated with poor prognosis.

How do we classify Multiple Myeloma to decide on the outcome?

There are two systems by which we prognosticate MM. One is Durie-Salmon system and the other is International Staging System

How do we treat Multiple Myeloma?

Autologous BMT is the standard of care for a newly diagnosed Multiple Myeloma after the disease is brought under control by 4-6 cycles of chemotherapy.

The following are treatment options for active multiple myeloma. The types of treatments given are based on the unique needs of the person with cancer.

Chemotherapy is usually given in 3 phases:

When is BMT needed for Multiple Myeloma?

The best results are obtained if Autologous BMT is carried out upfront. Even if BMT is carried out later, the PBSC should be collected within the first 6 months of good response. Otherwise, mobilisation of PBSC becomes difficult.

How is Conditioning for Autologous BMT done in Multiple Myeloma?

High dose Chemotherapy is generally used in conditioning for BMT.

Generally not, however, this gives a prolonged period of good quality life not requiring any treatment. This can vary from 1-10 years. The best results are obtained, if a patient achieves a proper Complete Remission after BMT.

The patients have to be monitored closely. Once the paraprotein rises sharply or the Autologous BMT patient becomes symptomatic, treatment is warranted.

Why is Allogeneic BMT not considered early in Multiple Myeloma as in Acute Leukemia?

The results of Autologous BMT are very good and result in virtually no mortality. Hence, Allogeneic BMT is reserved for patients after relapse.

Who can be a donor for Allogeneic BMT?

Although we prefer a matched family donor, a Half matched (Haploidentical) family donor or an unrelated cord blood are suitable alternatives.

What are the results of Allogeneic BMT in Multiple Myeloma?

This is the only curative treatment for Myeloma. However, it is very difficult to eradicate Multiple Myeloma completely. The newer drugs and a sequential approach of Autologous BMT, further treatment and/or Allogeneic BMT results in patients of Multiple Myeloma surviving over a decade and some of them are indeed cured.

What is Minimal Residual Disease?

Minimal Residual Disease (MRD) means patient still has a minimum disease and has not fully recovered. Response to treatment is conventionally defined by the number of blasts we see under the microscope. If we see less than 5% such cells it is called COMPLETE REMISSION (CR).However, CR means that the number of leukemia cells in the body are less than 109 or 1000 million cells. Further treatment which spans over months of intensive treatment and years of oral treatment are geared to reduce the number of leukemia cells to a level where our immune system can eliminate the remaining cells.

MRD is the detection of cells below 1%, which can range of 1 in 1000 to 1 in a million cells. This enables us to monitor the effect of treatment and change it, if needed.